Fun with an 80 year old camera 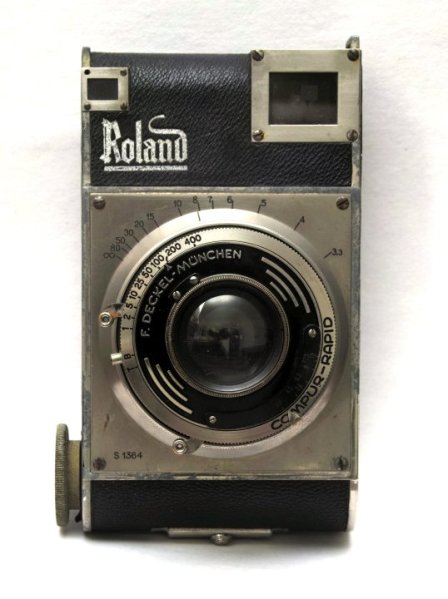 I recently inherited a camera, a 1936 Roland Kleinbild made by Plasmat in Germany.  It uses  medium format 120 film in a 645 ratio with a 70mm f2.7 lens.  The shutter appeared to be working so I was eager to put in a roll and see what this 80 year old camera could do.

The back of the camera.  You load a roll of film and turn a knob to wind the film until the first frame number on the back of the film appears in a red window, fire the shutter, then turn the knob until the next frame number appears.  The windows are red because black and white film is less sensitive to red light.  I neglected to research why this camera has two windows in the back.  I wound the film until the frame counter showed up in one of the windows.  I figured that the extra window just gave you advance warning when a frame number came up, because you cannot rewind the film if you go past.  It’s hard to see the numbers through the red windows. 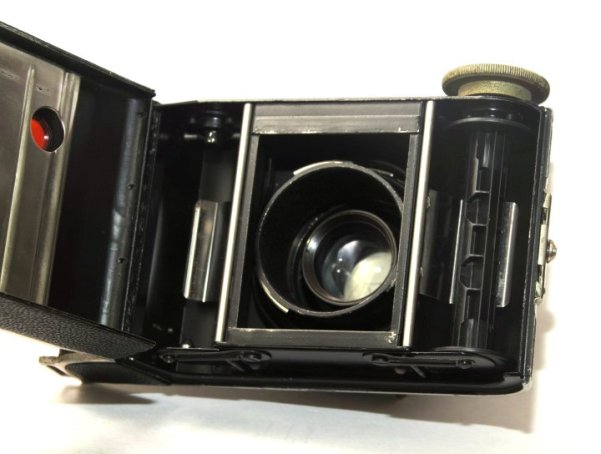 The camera opened.  You put an unexposed roll on the left, pull out some film and put the tab in the slot on the winding spool on the right, wind till tight, then close the back. When finished, you take out the winding spool and develop it. You move the empty supply spool from the left to the winding side for the next roll.

For my first roll I used Kodak Tri-X ISO 400 black and white film for that old camera black and white film look. 120 format is 6 cm wide, but different cameras can take pictures in different aspect ratios, such as a square 6×6 frame for 12 exposures on a roll, or 6×9 frame for 8 exposures, or even 6×24 for only 3 shots per roll.  The back of the film is printed with rows of numbers for the frame sizes, and cameras have windows positioned to view the appropriate row.  The Roland camera frame is half the width of 6×9, that is 6×4.5 (also called 645), so you can get 16 photos per roll.  However, early film did not have a row of markers for 6×4.5 pictures, so some cameras, like this one, had two windows for the 6×9 row. You wind the film until a number appears on the first window, take an exposure, wind it until the same number appears on the second window, take an exposure, wind until a new number appears on the first number, and so on.   In my haste, I wasted half the roll of film and only took 8 pictures. I used every other frame.  I should say I have used 120 film cameras before (here‘s an album of mine with a Yashica),  just not one with two frame counter windows. 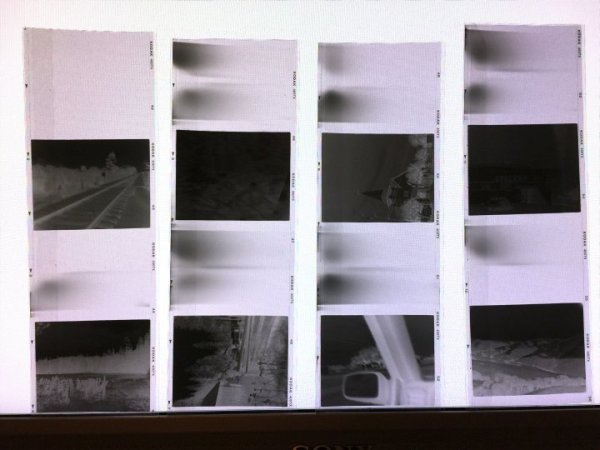 I sent the film to TheDarkroom.com for developing and scanning. Here’s what the negatives look like, with gaps where I could have taken more pictures.  There is some shadowing in these gaps– apparently there are some light leaks in the camera.  The shadows don’t appear to line up with the frame counter windows, they are probably from the hinges on the film back.  I’ll cover them with black tape next time to see if that fixes it.

Detail of the shutter and aperture settings around the lens. The camera does not have a light meter.  I haven’t learned to tell just by looking at a scene what f stop and shutter speed to use for a given film, so I used my digital SLR camera (Sigma SD1) as a light meter.  I  set the ISO in the SD1 to 400, set the zoom lens to approximate the view in the Roland, (the Roland is 4:3 ratio instead of the SD1’s 3:2), chose a shutter speed to reduce blurring, and the SD1 would tell me what aperture to use.  Unfortunately, I didn’t take notes as I took pictures, but sometimes I took the same shot with the SD1, which records the exposure data in the digital file so I know what I used in the film camera.

Side view showing tripod socket and film winding knob. Before focusing, you extend the lens tube from the body, and after taking a shot it collapses for compact storage.

The Photographs
Here I present all 8 photos I took, complete with exposure, focus, and winding goof-ups.  You can look at them as a failure, or a learning experience, or … art?

1) Train tracks, Santa Cruz, California. Exposure is ok but the focus quite blurry.  My digital shot that I copied the settings from was f4 at 1/40 sec. which is kind of slow but should be ok if you hold the camera steady.  I thought I did, but maybe I flinched a little releasing the shutter.

2)  Long Meadow, Giant Sequoia National Monument, California.  Exposure ok but for some reason focus is sharp at the edges and soft in the center.  Digital shot reads f8 at 1/400 sec.

3) At first I had no idea what this could be, then I remembered I took a shot of the gnarled roots of a huge fallen tree at the Trail of 100 Giants in Giant Sequoia National Monument.  I don’t have the same digital shot, but it was in shade so shutter speed was on the slow side but still should have been ok. I really must have jerked the camera or something when the shutter released.   Looking closely there are some sharper horizontal edges in the center.  I remember now I took a shot of mountain ranges in the distance from Dome Rock in the park.  I must have forgotten to wind the film, making a double exposure. Also lots of vertical scratches.  Next time I must make sure to clean dust out of the film path in the camera.  I thought I did, but maybe some particles flaked off, not surprising if the camera hasn’t been used in decades.  The first two shots didn’t seem to have scratches though.

4) Abandoned ranch in Sequoia N.M.  The fence is underexposed, but the sky was bright, it was a difficult scene to get good exposure for. Too blurry again.  I don’t have a corresponding digital shot for shutter speed.

5) Church in Alpaugh, California.  Finally, a very sharp, well exposed image. Even fine lines on the shingles are sharp.  I don’t have a digital camera version but I recall it was a bright day so I used 1/400 sec and maybe f 11.  I don’t think I’d deliberately compose the image like that with so much sky.   Maybe the viewfinder view differs from the actual view more than it seems.  Lots of scratches again. 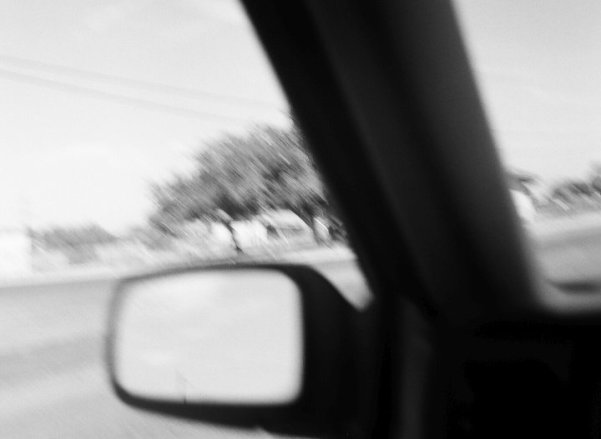 6) My bad.  Nice blurry image of my side mirror in Alpaugh. I loaded the shutter for the next shot and it accidentally went off in my car.  I’ll try to remember to set the shutter while pointing at my subject, so if it goes off too soon I might get a good shot anyway.

7) Market in Alpaugh. Blurry again.  Pretty sure I was using 1/400 sec, I must have jerked the camera a little firing the shutter.  I was a little puzzled at the dark right edge and the diagonal lines in this image, then I remembered the next shot I took, and realized this is another double exposure.    I took a portrait shot of power lines and towers near San Louis Reservoir by highway 152.  The digital version was f11 at 1/400 sec.  Again there’s too much sky, the rangefinder window may be off a little more than expected.  The power lines in the second shot are not that sharp either.  I think in my notes I’ll read off the distance on the focusing dial, so if I get a sharp image at infinity I’ll know where to set it. 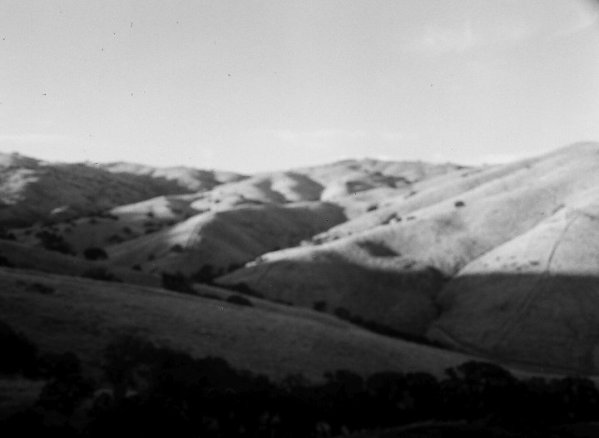 8) Hills by San Louis reservoir, California.  Blurry again, and a little too much sky. Digital version says f4 at 1/100 sec.  There wasn’t a good vertical edge here for the rangefinder so maybe it wasn’t hand shake that made this blurry.  I should just verify the mark on the focuser for infinity next time.

Judging from the church photo, this camera is capable of taking sharp, properly exposed photos but you have to be careful, as with any film camera. You should get a greater percentage of good pictures with film because, being much more expensive than digital, you should be motivated to be selective and careful.  That’s the idea anyway.  Film is quite a different experience than digital, you have to wait for it to develop for feedback and can’t take so many shots hoping to get good ones by accident.

So, notes to self for the next roll:
Clean the inside of the camera thoroughly! But gently.
Use both film counter windows!  Get 16 shots per roll.
Wind the film after every shot without fail! Unless you want a double exposure.
Take notes!  Subject, aperture, shutter speed, focus, composition.
Hold the camera as steady as humanly possible!  Or, dare I say, use a tripod.
Take a shot with people in it!

Yikes. So three dollars each for these masterpieces of photography.
Before trying the Roland again, maybe I’ll wait until I finish the film in my 35mm half frame Olympus FT (72 exposures per roll!)

Like Loading...
This entry was posted in photography and tagged antiques, cameras, film, photography. Bookmark the permalink.

3 Responses to Fun with an 80 year old camera