Adventures in Half Frame Negative Scanning

I still shoot on film, and I recently scanned my own negatives for the first time. I use an Olympus Pen FT single lens reflex camera, which takes photos in half-frame format. Using a roll of 135 format 35mm film, the FT takes pictures half the standard size to get 48 exposures on a 24 exposure roll, or 72 with a 36 exposure roll. The cameras were sometimes marketed as “single frame” since they used the same size as a single frame of 35mm motion picture film. 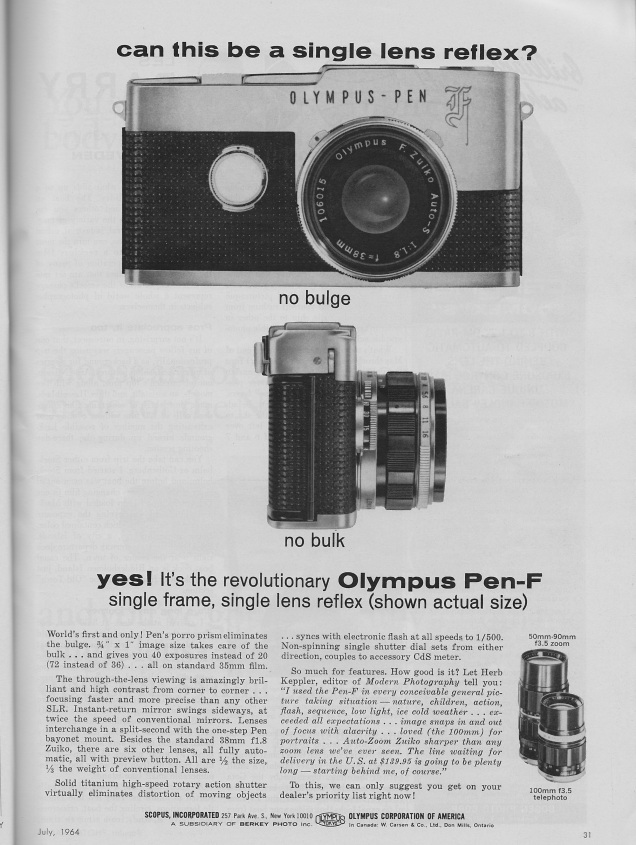 Film and processing can be expensive, so getting more photos per roll helps, but processing half frame film is problematic. I used to take film to my local Costco for developing. They would scan and print the frames in pairs, and I would have to crop the frames myself. I tried sending the film out to an internet service, and they scanned each half frame separately, but they charged me extra for scanning half frames, which defeated the purpose of more frames per roll. I recently acquired a Cannon 900F Mark II scanner which could do negatives, so for my most recent roll, I had a local lab develop the film, then I cut and scanned the negatives myself. I put on my “one hour photo” white gloves and got to work.

The white gloves are supposed to be lintless and protect from fingerprints.  Removing dust is a constant battle– the scanner will magnify the smallest speck and turn it into big spots.  I was continuously using a blower bulb and soft brush. Two strips of negatives fit into a rather flimsy plastic holder in the scanner to hold them flat and straight.

The holder goes on top of the scanner glass, fitting in special notches. The negatives are illuminated by a lamp in the scanner lid.

Hitting the preview button on the scanner software automatically separated the frames into thumbnails and converted the negatives into positives. It’s remarkable how the brownish negatives get turned into full natural color.

Uh oh. The scanner got confused by the half frames, and aligned some frames evenly in pairs, but some frames were centered with half-half frames on either side.
I looked for a setting in the software to turn off the automatic frame detection but could not find it. I then took the negatives out of the holder and put them directly on the glass, but then the scanner software said it could not detect the negatives. I was eager to see how all my pictures turned out, so I just went ahead and scanned automatically. Then I re-inserted the negatives, shifted the positions and scanned again, trying to get each frame completely in at least one of the scans. This took quite a long time– it scans 9 frames at 4800 dpi in about 15 minutes, then I had to examine the scans closely and see which frames needed to be redone. It took me two or three tries of each strip to get every frame completely. Only after doing all this, I found how to turn off the auto frame detection: it is a little icon in the upper left corner, which lets you select any part of the scan area. It would still take some time to select all 48 frames on the roll this way.

I read a review of this scanner and their tests showed that the maximum resolution was 1700 lines/inch, and to get that you had to scan at 4800 dpi. This made large files (about 11MB) at about 6640×4464, so I figured I’d downsize them by 1700/4800 = 35%. But after looking at the downsized result, it seemed like I was losing something, so after I cropped and rotated the 4800 dpi images, I just saved them without downsizing, as jpegs with a quality of 90%, and as half frame a typical image is about 2MB and 3192×4392 pixels. I can always downsize them later, and disk space is cheap these days.
So one by one, I cropped each frame out from the scans, rotating if necessary, and renaming them so they were in sequence the way I shot them (which helped me remember when and where I took them). I wanted to process them as little as possible but some of the images were badly overexposed, so I adjusted the brightness and contrast in Gimp to get a decent image. I also removed dust spots and lines as best I could in most of them, but on some I left the dust in for effect.

This is at Natural Bridges State Park in Santa Cruz, California. I don’t know why it turned out so blue, maybe at the time I shot it my eyes were auto-white balanced and didn’t notice the natural blueness. I left the dust in, for that old dusty photo look. Even so, the dust isn’t distributed quite what I’d like, I’m tempted to rescan it with more dust! 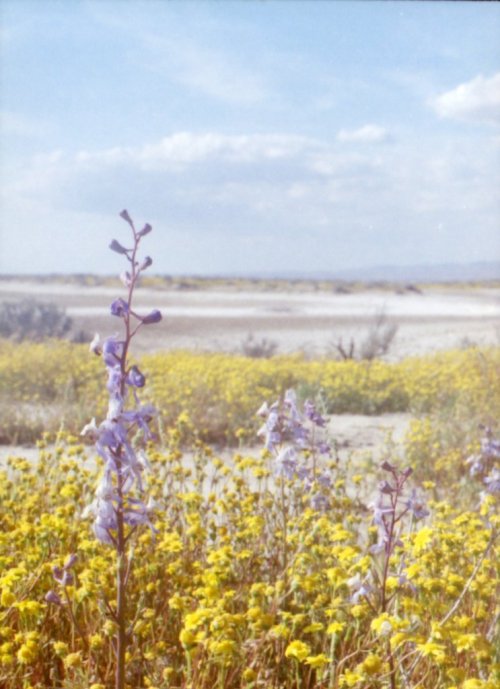 This one was at Carrizo Plain National Monument, California, a place famous for sudden wildflower blooms. It was badly overexposed, so I adjusted brightness and contrast in Gimp, I hope it doesn’t look too unnatural. The camera was loaded with Fujifilm X-tra ISO 400 film. The shutter is only as fast as 1/500 sec, and the G. Zuiko 40mm f1.4 lens I used (radioactive by the way) only goes up to f16. In bright sunlight and bright ground/sky this may exceed the “sunny 16” rule– next time I may try an ND filter. I left most of the overexposed frames alone though, for a dream-ish “high-key” look. I should know by now how to eyeball the exposure, but I haven’t trained myself. 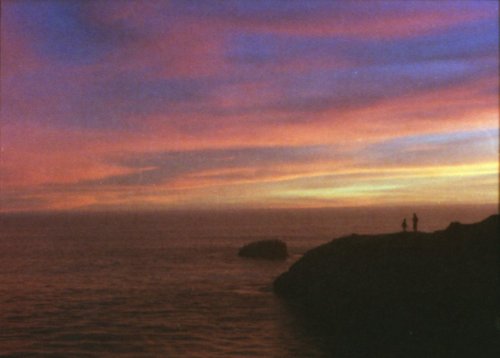 The ISO 400 film is showing its grain, especially with a small half frame enlarged. Maybe we’re more used to grainy black and white than grainy color, but color high-grain has it’s own appeal, I think. I now have the camera loaded with black and white film, and I’ll scan the negatives myself again next time. It’s a lot of trouble to scan my own negatives, but I’m one step more involved in the process and I feel I own the failures and successes more. I don’t think I’ll go so far as develop my own film. I have done that before, though, and it was kind of fun, now that I think about it…

You can see more pictures from this roll at my flickr site here.

Like Loading...
This entry was posted in photography and tagged cameras, film, photography, scanning. Bookmark the permalink.

4 Responses to Adventures in Half Frame Negative Scanning