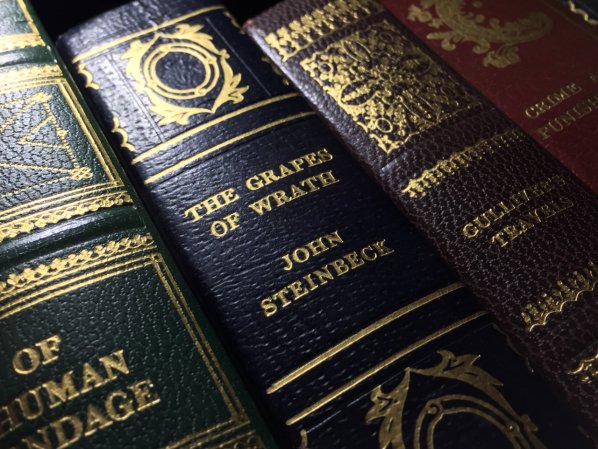 I finished reading the book “The Grapes of Wrath” by John Steinbeck.

It’s about a family struggling to survive,  leaving Oklahoma during the Dustbowl and Great Depression and their journey to California.  I’m not writing a book report or book review here, just some thoughts about books.  I will say The Grapes of Wrath is a great book.  It stays with you.  It’s very human and relevant to today.

I fear we may see a return of the book’s Joads and Hoovervilles this century. For the story of last century’s man made ecological disaster in America, see “The Dustbowl” documentary by Ken Burns.

I had heard that it’s not good for sleep to read by emissive light, like a backlit computer screen or tablet.  I usually don’t have trouble getting to sleep, but I thought it wouldn’t hurt to read something on paper instead of a screen before going to bed each night.

My parents had a set of books from a classics library publisher, the kind you get once a month, that are large, hardbound, pages sewn in signatures, with gold edges to protect against dust, gold stamping on the covers, and a built-in ribbon bookmark.  I had read several of them over the years and after finishing a paperback, I thought I’d tackle another of these volumes. 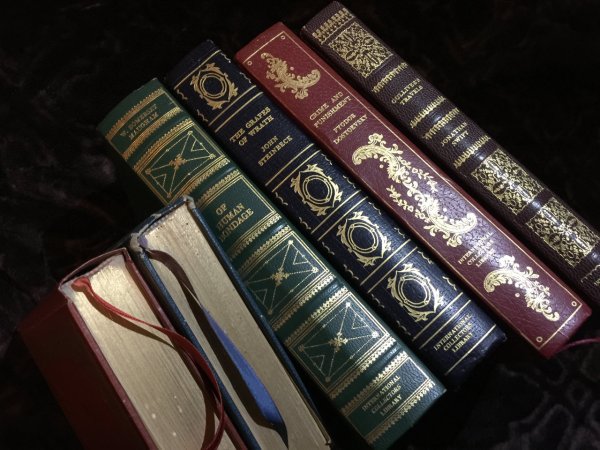 Nowadays, with terabytes of information fitting in the palm of your hand, it seems remarkable that one book, one story, takes up so much three dimensional space.  A big book is so corporeal and satisfying though. 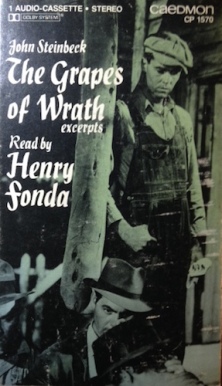 I saw the movie “The Grapes of Wrath” with Henry Fonda years ago but didn’t remember it well, maybe I just saw part of it on TV.  I have a long commute and listen to a lot of audio books. I have a tape cassette of Henry Fonda reading excerpts from the book.  As I read the book, I imagined his voice speaking the words, even parts that weren’t on the tape.  Here is a sample:

Audio books have the same information in a book (aside from pictures), but adding impact, emphasis, and tone of a human voice, like adding color to black and white.  I’ve heard an audiobook of Patrick O’Brian’s “Master and Commander” with a superb performance by a single person reading every minor character with a distinctive, separate british accent, and Tolkien’s “The Hobbit” with all 13 of the dwarves and other characters individually recognizable by only one speaker.  I’ve also heard good books with poor readings, with pathologically repetitive emphasis patterns in every sentence, regardless of context:  “He woke up and brushed his teeth.  He then had coffee, walked outside, and caught the bus.”

Movies are good at communicating what someone sees, obviously.  It’s hard to describe how something looks and moves with words, but if you don’t read, can you make good movies?

It’s hard to describe ideas, thoughts and emotions with images, words, or sounds alone, or even together.  It’s hard but a good book like “The Grapes of Wrath” can, with just words. Would I like to see it read aloud while acted out and filmed, with music, in color, in 3d, with head tracking goggles, vibrating seats, and scratch and sniff cards?  Sure.

What if books were printed with words in different colors, for example “orange” in orange, “blood” in red? How would that look?  Here’s a sample, from “The Brand New Monty Python Papperbok”: 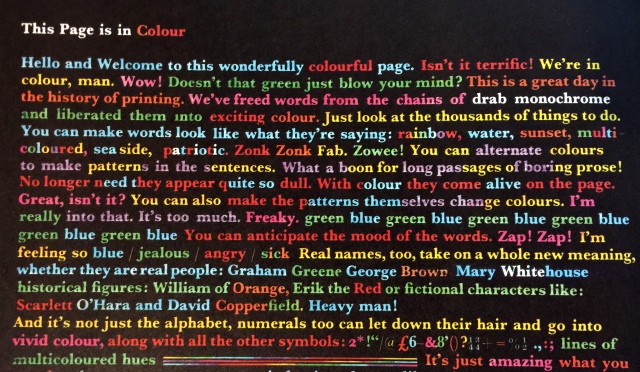 Interesting, but kind of distracting.  Maybe I’d get used to it.

As for the book “The Grapes of Wrath”, if for you it’s “too long, didn’t read”, here it is in one minute (warning: spoilers, although he talks so fast you probably won’t remember it):

As for this post, TL;DR:  “The Grapes of Wrath” is a good book, reading is good, and books are good. Outside of a dog, a book is man’s best friend. Inside of a dog it’s too dark to read.